This dish is a crock pot staple in the South, but I’m putting my spin on it by cooking it out on the smoker and serving it up in a big ole sandwich I call The Mississippi Poboy! This recipe starts with a Certified Angus Beef chuck roast I found at a local grocery store that weighed just a little over 2lbs.

The first step is to get some color on the outside of the roast. The original recipe calls for browning the meat in a large pan on the stove top but it has way more flavor on the pit. First season the outside with a little salt and pepper. I went with my Killer Hogs TX Brisket Rub but you could use anything you want here. Now you need a smoker or grill set up for indirect cooking. I fired up my Big Green Egg with Royal Oak lump charcoal; I also added a few chunks of cherry wood for smoke flavor. Once the BGE stabilized at 275 degrees it’s ready to cook. Place the seasoned roast on the cooking grate and cook it until the outside has a mahogany color - it’ll take about 2 hours.

Instead of using a crock pot I broke out the original slow cooker - my 5 quart Lodge Dutch Oven. The chuck roast goes into the dutch oven with 1 stick of butter, a packet of Beef Au Jus seasoning mix, 1 packed of Ranch dressing mix, and 6-8 whole pepperoncini peppers (this is the classic MS Pot Roast ingredients).

Place the lid on the dutch oven and set it on the cooking grate. Continue to cook at 275 degrees until the roast is almost falling apart. The internal temperature will be around 210 degrees but you should feel no resistance when probed. It’ll take about 2 hours to get tender - but check to make sure the roast is fork tender before removing it from the pit. At this point the roast is ready. Carefully take it out of the dutch oven and shred the meat using two forks. You could serve it over rice or mash potatoes but it makes one heck of a sandwich.

To make my Mississippi PoBoy, take a 12” hoagie roll and split it length wise. Layer slices of White American Cheese on the bottom half of the bread and pile the shredded roast on top. Drizzle some of the juices left in the dutch oven over the meat and garnish with extra slices of pepperoncini peppers - then you have what I call The Mississippi Poboy! 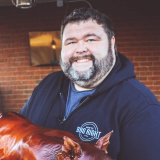 If you have any questions about placing an order or any of the products, please contact Cheyenne, Kim, or Katie at support@howtobbqright.com  and we will get back to you right away.

If you would like more information on becoming a wholesaler for Killer Hogs Products or HowToBBQRight Products, contact Jamie at jamie@killerhogs.com or Mark at mark@howtobbqright.com

I'm Malcom Reed and I run this online BBQ shop with my wife Rachelle. Here you will find my Killer Hogs BBQ Products and Malcom's Products - and other competition-quality rubs, sauces, injections and equipment.